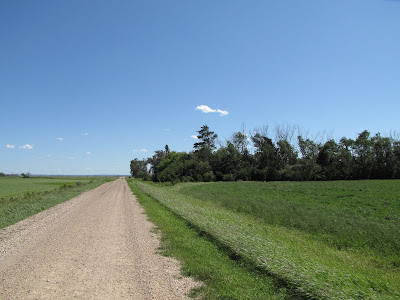 In the copse up ahead is the house in which my mother spent a dozen years of her childhood. I visited it with her 18 years ago and even though it had already been abandoned to the elements we were able to enter and go up the stairs to the little room she used to share with her two sisters. Unfortunately the photographs I took inside the house did not turn out and I must rely on my memory to recreate the place that nurtured my mother's shared remembrances of a
depression-era upbringing.

The homestead was built on another's land, a tenancy farm, after her family lost their land in Cayer due to the 1929 stock market crash. It was situated a few miles north of Gilbert Plains, a small town on Highway 5, north of Riding Mountain National Park and west of Dauphin in Manitoba. The relocation precipitated their eventual departure from the prairies and permanent move west to British Columbia 13 years later, at the end of World War II. 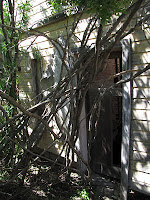 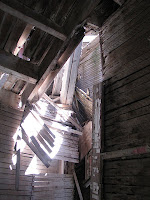 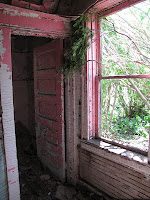 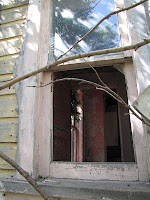 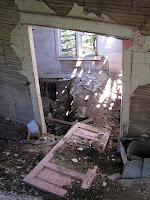 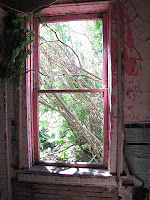 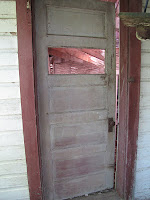 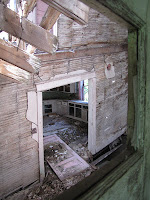 A thicket of poplar trees has grown tightly around the little house my grandfather built for my grandmother - out of sight as if a Sleeping Beauty. I could not see it when I first drove by and only spied part of its fallen roof after I turned the car around. With some difficulty I breached the barrier of little trees to discover the roof had collapsed through the second floor and through the first where once stood the parlour and all is sinking into the cellar.
A tree grows through the front porch. 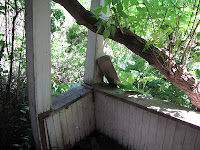 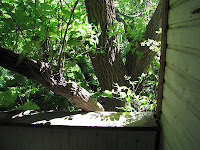 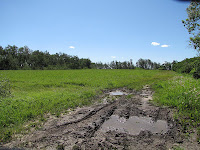 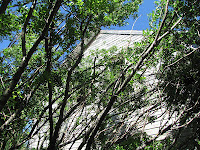 No doubt my grandparents would be puzzled and fairly amused at my sentimental feelings for this pile of rotting timber. It is my understanding that, once the decision to leave was made, they left and never looked back. And yet, as a second generation survivor of the Great Depression, I feel as though I too know that house from hearing my mother speak of it often and lovingly
when I was young.

Old farms die like this on the prairie - slowly and with plenty of melancholy.

Posted by Christine Hatfull at 23:49