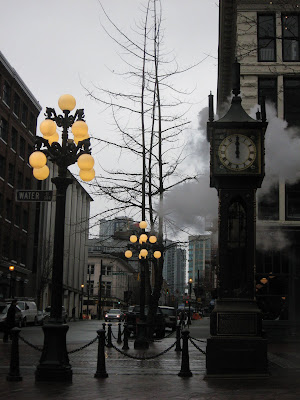 Here is one of The Town's beloved tourist attractions and most eastern destination on the tour bus route (apparently tourism czars like to steer their captive audience away from Gastown and towards Robson Street due to eastism and Chinatown is part of a separate adventure-style agenda). When they are dropped off in front of this landmark, the visitors stand in a circle with their cameras at the ready, waiting patiently for the display which occurs every quarter of the hour on the hour. The piece toots loudly and spews steam from its cap, everyone is pleased and the tour moves on.

It is not an easy feature to photograph because there are many distractions at the corner of Water and Cambie. Early in the morning and the middle of winter are good times to capture the Victorian silhouettes without the restless current of modern life. Even on this misty grey and rainy spring day the Steam Clock will be irresistible to hoards of travellers. 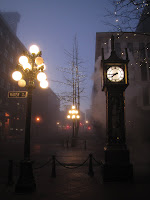 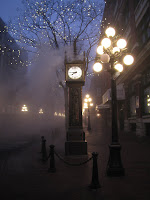 Posted by Christine Hatfull at 07:50