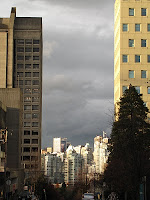 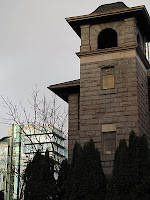 Where I was born 56 years ago is now a centre of medical research and the second largest hospital in Canada. The building on the far right, is a tower of the original Heather Pavilion at Vancouver General Hospital. It sits at the top of Fairview Slopes, in the middle of the Vancouver Hospital and Health Services Centre with its assorted pavilions, medical office towers, satellite divisions, rehab centres as well as its neighbour, the BC Cancer Agency, and far flung partner, the UBC Teaching Hospital.
A large workforce requires feeding and I have noted a preponderance of good and inexpensive restaurants along this part of the Broadway corridor although two of my favourites were recently closed because of fire damage. The south side of Broadway may be almost as old as the 104 year old Heather Pavilion itself which is less vulnerable to fire due to a recent renovation.

Posted by Christine Hatfull at 08:05