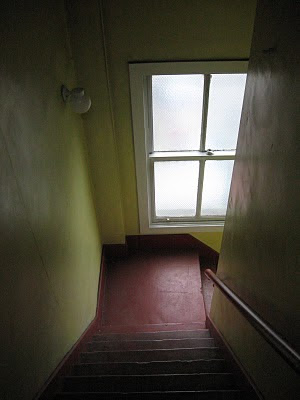 I think of this as my grandfather's window at 901 Main Street due to the building's use as a Rec Hall for the employees of the B.C Electric Railway Company, for whom he worked, before the First World War. He was already in his mid-30's but youthful for his age when he signed up in 1914; in the 16th Canadian Scottish he was among those who suffered through action at Vimy Ridge in April 1917.

My father was apparently conceived as his father went off to battle and born to his mother nine months later on December 29, 1917 in Folkestone, England while German zeppelins dropped bombs on her hometown of London. Meanwhile his father was in hospital for wounds suffered at Vimy; by March 1918 and now 40 years old Granddad was sent back to Canada with his war bride and infant son. By all accounts he was never the same again and did not return to his former job at B.C. Electric after the war.

In later years the building was home to artist's studios but now that developers have moved the painters out, in anticipation of eventual condo development, its fate is uncertain. The window remains as a melancholy tribute to duty and memory.

Posted by Christine Hatfull at 20:22