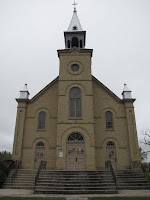 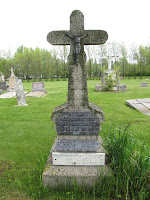 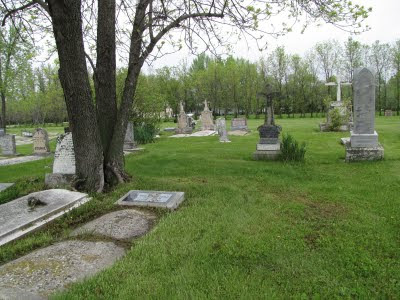 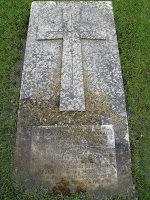 No. 2055 - 29 May 2011 - 11:09:36 * No. 2066 - 29 May 2011 - 11:12:19
I have been to this Catholic cemetery, in St. François-Xavier (turn off the Trans Canada Highway west of Winnipeg at the statue of the White Horse), three times in the last twenty years because this is where my grandmother was born and she and her nine siblings were baptised in the church pictured above. I spent three days in the Manitoba Archives recently, searching through Henderson's Directories on micro-fiche for any mention of the great grandparents who came to settle in Manitoba from Québec after 1875 and found evidence for Narcisse Cayer II and Marie Perras having lived in the parish before they died. Upon returning to the cemetery this year it took only five minutes to locate these people, my great great grandparents,
who came from LaPrairie, Québec.

Happily and unexpectedly I was also given access to an ancestor chart which lays out 400-500 plus years of my maternal grandmother's Quebec and French ancestry. Additionally, I have discovered, through further research, that the very Marie Perras buried here represents the family's direct line back to Charlemagne and the merovingiens. A large percentage of French people can trace a similar link and it is exhilarating to connect to history, in such a familal way, with names and dates. My field of interest is in the migration of human populations and rather broader than the study of my personal genealogy but smaller, independent and community based stories often reflect the larger movements just as a tree in the forest appears to be
a fractal of the entire forest.

The cemetery is showing its age and the current state of flood affairs in the province of Manitoba. The sinking tombstone, in the bottom left corner above, belongs to Father Kavanagh, the half-blind, Irish priest who baptised my grandmother and her many siblings and
whose messy French longhand is a struggle and satisfaction for me to read and translate.
I was happy to find him resting next to my
great great grandparents.

Posted by Christine Hatfull at 21:19