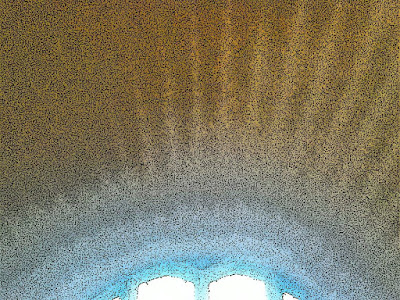 It was with this simple and powerfully clear phrase that William Tyndale (c. 1494-1536) began the Gospel of St. John in his groundbreaking translation of the New Testament from the original Greek, published in 1526 using the latest movable type printing press technology.
His focus was not on the turn of phrase, but on its purpose and accessibility.  He believed that scripture should be known "... even by the boy that driveth the plough."  Although he lived for the final twelve years of his life in exile on the continent, hounded and reviled by academic rivals and religious authorities (two kings and a Pope - and at a time in history when people were being burned alive for simply possessing a copy of the Lord's Prayer in English), he persisted in his dangerous and solitary work of translating scripture.  In his own words, he sought to "interpret the sense of the scripture and the meaning of the spirit."
Tyndale was a gifted linguist with a genius for translating, and became fluent in French, German, Italian, Spanish, Latin, Greek, and Hebrew along with the under-valued Middle English of his homeland.  Influenced by the work of Luther and Erasmus, he translated the New Testament and the Pentateuch (first five Books of the Old Testament) from Greek and Hebrew into a precise, rhythmic, and idiomatic written vernacular now recognized as early Modern English.  F. F. Bruce writes that "Tyndale, working in the white heat of potential martyrdom, rises at times to a poetic glow, transcending the style of the original Greek" (The Book and The Parchments). 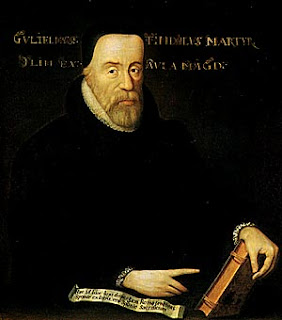 Within months of his execution in 1536, his scriptural translations were legally published in England but not under his name.  Although expunged from the record, his language, skill and faith went on to live in the six versions of the English Bible leading up to the KJV.  In 1611 the committees of scholars, authorized by King James I to write a standardized English version of the Bible, used up to 85% of Tyndale's translation of the New Testament and 75% of the Old Testament that he was able to translate before his imprisonment (where he was denied pen and paper).  Remarkably, they retained the archaic endings of the early 16th century that were already falling out of use.  In doing so they created an authoritative yet highly readable version that would travel around the world to become a classic.  From The Book of Common Prayer, to the King James Bible, to the Wesleyan Hymnody and on into the twentieth century, the sacred language of Anglicanism has been essentially that of Tyndale.
His impact on Modern English is historic and it is upon Tyndale's shoulders that Shakespeare, Donne, Milton and all the rest, under the sun, stand.  The lively and unadorned phraseology was - and has become - an inseparable part of everyday speech and vocabulary wherever people speak the language of the Book: I am the way, the truth, and the life ... Let not your hearts be troubled ... A small still voice ... A labour of love ... The writing is on the wall ... See eye to eye ... By the sweat of your brow ... Eat, drink, and be merry ... The salt of the earth ... Nothing new under the sun ... For everything there is a season ... and hundreds more.

Although his ability to translate the spirit of the Word is now legendary, his legacy is still not widely or sufficiently known.  However, it is unlikely that Tyndale would have worried about the outcome of his own reputation.  It was in the person of this brave, modest man that the Holy Spirit lived - and continues to live - in the presence of his life's work.