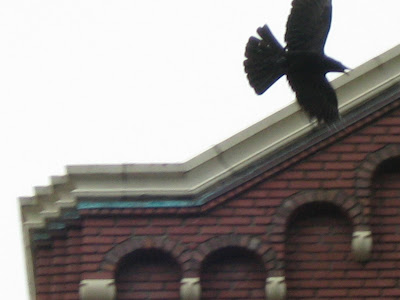 Every morning my father would feed a family of crows who nested in the Douglas fir tree in the backyard of our home in North Vancouver. "Here Charlie, Charlie", he would call from the back porch as he tossed dried crusts onto the carport roof. I caught him, on more than one occasion, leaving out slices of bread to dry the night before because he anticipated there would be no crusts in the morning to feed his crows. He kept an old birdcage in the basement should a sparrow fly into the large living room window and, stunned, need a safe place to recover. This happened at least once a year and I recall he lost only a couple in two decades; usually the birds were recovered enough within the hour to be released . The ones that did not make it were buried under the little apple tree in the backyard alongside Teddy the budgie and the assorted pet mice and gerbils that accumulated throughout our childhood.

Crows inhabit the trees in front of St. Paul's Hospital on Burrard Street where my father died 33 years ago today. Rest in peace Pa.