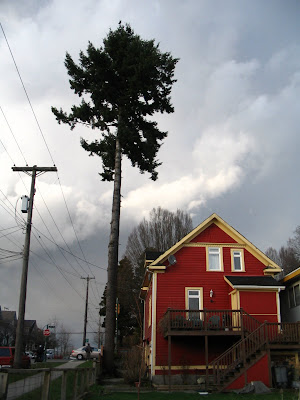 This picture was taken shortly after the big winds of winter 2007. While half of Stanley Park was blown down and trees in the rest of the city were in various states of damage, this exposed, stand-alone Douglas fir survived and was still marking the turf of the little red house. The three blocks of First Avenue in Grandview-Woodlands where this property is situated had been run-down and neglected for years when neighbourhood improvements showed themselves here on a highway not generally considered appropriate for my lovely home. Although the owners did not live here, preferring to make this a revenue property, they appeared to spend considerable effort and resources to bring it back to its pioneer glory. Alongside is the tree which acts as a beacon and can be seen from various parts of the city where next to it sits this little improvement.
Posted by Christine Hatfull at 07:49