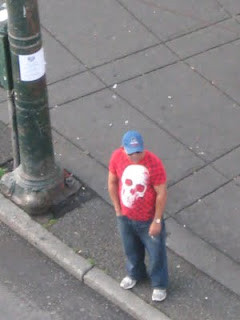 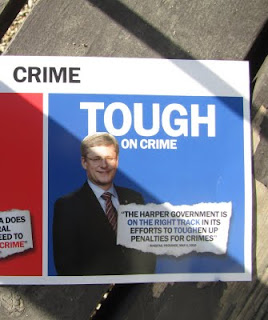 One man's crime is another man's profit.

The tough guy on the left is probably a member of a drug cartel and is apparently free to do business as long as he stays within the boundaries of Vancouver's "downtowneastside". As well as selling drugs he will be involved in the abuse and drug addicting of very young girls who have landed in this hell zone often due to family abuse and lack of education. Many refer to these female persons as "prostitutes" or "hookers" but really they are sex slaves and no more than children with stuffed animals hanging off their bags. They do not actually work for money but for the drugs that anesthetize their misery. When they are arrested and thrown in jail their male clients go free while their cartel bosses wait for them on the street. They will be beaten when they return without drugs or cash and then this pattern will repeat. Reviled by everyone and unable to escape their penury, most will die young and desperate within a short period of time from the bad dates, dirty drugs and impossible living conditions on the street.

Meanwhile the tough guy on the right is focused on property crime. He will tell you we need more prisons - built by corporate interests for profit. He will ignore studies suggesting a comprehensive national daycare program would help raise up hungry and unsupervised children whose parents, many single, make up the working poor because he disapproves on moral grounds.
At least girls can look forward to careers with the drug trafficking, money-laundering, sex-enslaving cartels which also give boys opportunities in drug dealing and pimping.
Both the federal and civic police forces can be witnessed standing by and watching because in many cases as one cop told me, off the record,
"if our political bosses tell us to sit on our hands, we sit on our hands". 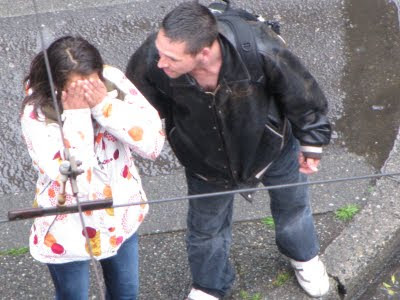 I lived over the intersection of Main and Hastings Streets for three and a half years and documented plenty of the above scenario. Eventually I was forced to walk away due to the stress and frustration of living amongst the most stricken citizens in our country. I am lucky - the young women in these pictures are not.

"Tough on Crime" is a bill of goods and yesterday a slim majority of Canadians bought into it at the polls. Today I am a Canadian who feels neither strong nor free.

Posted by Christine Hatfull at 11:21