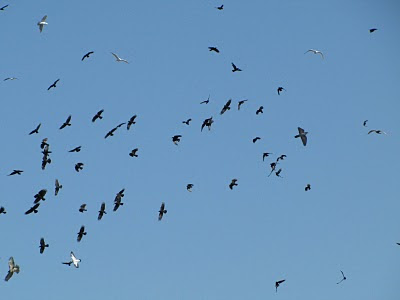 Where I am situated offers a birds-eye view of the surrounding area and the sky above. Having become sensitive to the cries of gulls when an eagle is spotted overhead, I assumed this to be the case during a noisy altercation one afternoon as I grabbed my camera. However I failed to spot one of the large high-flyers who make their home in a Strathcona church steeple or in the tall trees of a nearby park. Upon re-examining this picture, and struck again by the number of crows involved in a fracas they generally avoid, I spotted a lone character, different from the rest, in the bottom left-hand corner. As a new and untried birdwatcher I can only ascertain that this bird has the size, colour, and tail feathers of a smallish raptor; a hawk or harrier perhaps.

The sudden and brief appearance of wild creatures in the urban core is always a surprise and delight especially given the context of downtown habitation which is as far from natural on so many human levels.
Posted by Christine Hatfull at 23:51