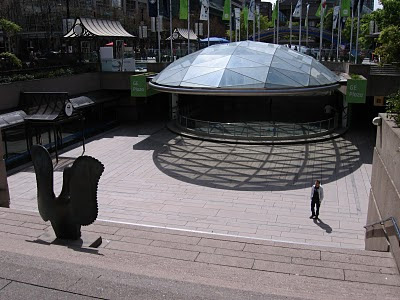 Perhaps we will still refer to this public space as Robson Square but the signage on all corners says GE Plaza.

I was living in New York City in the 1980's when this same thing happened to Rockefeller Plaza after GE bought everything at the Center including NBC which resides in the complex's main building. Mostly everyone ignored the corporate name changes and refused to give GE any credit for the famous landmark in mid-town Manhattan. Our landmark, on the other hand, is discreet and human-sized and more easily overlooked. It was designed by Arthur Erickson as a public concourse leading into and away from the important public spaces of the Courthouse and the Vancouver Art Gallery.

Corporate sponsors come and go but civic landmarks, public spaces, and local awareness are precious commodities of a functioning, meaningful, and supportive urban environment. The current corporatization of British Columbia has been gaining momentum for at least a dozen years and shows no sign of letting up in spite of a recent high-profile resignation. Campbellization devours not only the resources and services of the public but also the good will. Possibly one's role, as a historian, is to remain vigilant of events riding so consistently below the radar of everyday city life as to be not generally noticed.
Posted by Christine Hatfull at 22:49