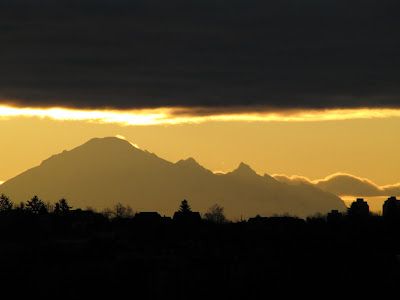 Gastown, Vancouver
The stratocumulus cloud mass overhead and the dark land below attempt to contain the reflection of sunlight on snow. The scene hints at the volcanic energy building within the mountain.
Mount Baker is an active glaciated andesitic stratovolcano. It is the second-most active (after Mount St. Helens) and the second-most heavily glaciated (after Mount Rainier) of the volcanoes in the Cascade Range of Washington State. It is also one of the snowiest places on earth and set a historical record, for greatest snowfall at a single point, in 2005.

Known as Koma Kulshan by the indigenous peoples of the Pacific Northwest, it was renamed, by British explorer Captain George Vancouver, after his 3rd Lieutenant who first sighted the peak from the HMS Discovery in 1792 (he who charts, names). Its 3300 metre summit is approximately 100 km southeast from downtown Vancouver and is visible from most of the Lower Mainland and higher elevations of Southwestern British Columbia. 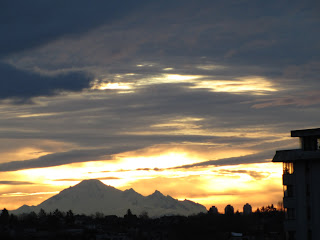 Posted by Christine Hatfull at 10:39