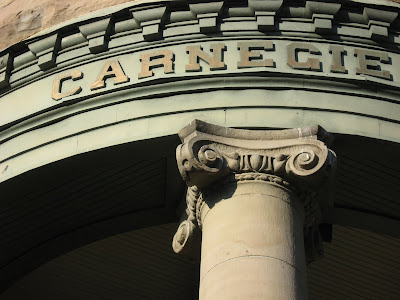 If it is true that the land is worth more than the improvements placed upon it, why does a Scottish industrialist's name remain steadfastly all over a building that is on land he never owned?
*rhetorical question alert*
The record shows that the land in question was never relinquished to the Crown by the hereditary title holders, the Coast Salish peoples, who contend that without a treaty, the land is, in effect, stolen.

Contemporaneously, Andrew Carnegie (the man whose moniker lives on in copperplate-gothic) was successfully branding himself by way of steel and education: making money with one and encouraging free enterprise through learning with the other. Funding for library infrastructure was available to any interested city, in the USA or the Commonwealth, willing to put the Carnegie name on a civic building. A municipality had only to come up with suitable land and nothing is more suitably inexpensive than free land.

The corner upon which the building is situated, at Main and Hastings, is a hilltop from which the street descends west through the downtown core to the harbour. Four blocks along the Hastings corridor is the Woodwards District . This multi-use real estate development was once the home of a family-owned department store that lost control of ownership in 1993. After ninety years in business their leaving created an economic and emotional deficit in the neighbourhood. Because the brand lives on under its former name, in the current re-development of the property, much focus is put on sentimentalizing the past in order to sell the future. Unfortunately, the number of social housing units originally planned for the project was significantly curtailed early in the process.

Now that The City of Vancouver has (quietly) pulled the brand name DowntownEastside from its official language there is present an opportunity to recognize the land's hereditary caretakers. The intersection at Main and Hastings is a focal point that dominates the attention of the city's oldest neighbourhoods: Gastown, Chinatown, Strathcona, Victory Square, and Oppenheimer/Japantown. This place deserves an older, better, less contrived name to help heal the shame and reflect the spiritual and moral potential at the centre of our city.

With equality comes success.
Posted by Christine Hatfull at 10:21