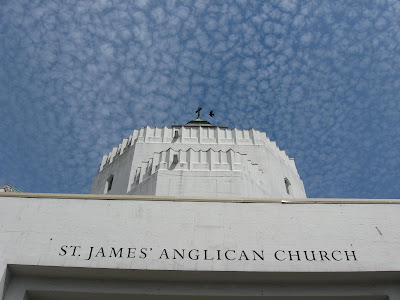 *epiphany / 3 - a sudden and important manifestation or realization.

Although I grew up singing in church next to my father (a man with a perfect ear and fine baritone voice) the austerity of the United Church of Canada in the 1960's could not have prepared me for the atmosphere I stumbled into at St. James Anglican Church one year ago. This lofty, poured concrete building is a spiritual, and architectural expression of endurance during hard times: an artifact of the Great Depression . I knew it still to be a cornerstone of our troubled community but I was surprised to find there inside a cultural oasis filled with the sounds and sensations of pipe organ, choral song, and incense.

Within four weeks I was a member of the High Mass Choir: singing plain song, Palestrina, Byrd, Handel, Bruckner Fauré, Britten, and more. I discovered, during Lent, (the busiest church season of the year) that nothing compares to the sheer thrill, full body, spiritual rush of sight-singing difficult music as a newly hatched alto . It is the same joyride I discovered as a college student who dabbled in music courses and extra-curricular singing. What. A. Nerd.

Singing with the St. James High Mass Choir is an epiphany. Parish life gives a pleasant aspect to my neighbourhood where singing the Great Music of the Western Church is occasionally followed up by a pint at the Alibi Room or Irish Feather.

The Epiphany of The Lord Mass begins at 6:30pm, Wednesday, January 6, 2010 and will be followed by a potluck dinner, which is almost as fun as beer.