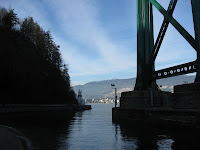 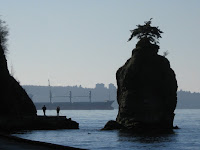 One year ago today there was a muted re-opening of the Stanley Park seawall two years after the big blow of 2007. Although the storm garnered much attention when it cut a wide swath through the stand of trees, the eventual completion of structural repairs to banks, pavement and seawall went by relatively unnoticed.

The greater storm was Typhoon Frieda in 1962 when it seemed that half the park and much around the city blew over. I remember, as a child, driving through the park causeway in the weeks after the thrilling event and seeing large corridors of light exposed where all was dark before. Remnants of those fallen giants still rot on the forest floor and continue to provide new generations of seedlings nourishment in their "nursery" wood.
Posted by Christine Hatfull at 09:04