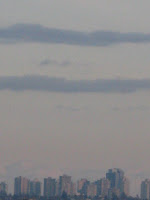 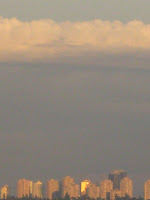 English landscape painter John Constable (1776-1837) was inspired to convey the effects of weather, cloud formation and changing light on the scenes he painted repeatedly and named his outdoor practice "skying". "My first lesson was when Benjamin West* told me not to forget that light and shadow never stand still", claimed Constable of his teacher at the Royal Academy. Perhaps that is why his manner of painting the appearance of changing light on a landscape was prescient of a photographic approach even though he died just before the invention of photography. Forty years after his death, Eadweard Muybridge's action photographs proved that a trotting horse has all four feet off the ground at times, thanks to the invention of faster photographic plates.

I have a superb physical perspective from which to record the aspects of weather and light on my urban landscape; on a daily basis and with the assistance of a digital camera. Burnaby, a municipality of Metro Vancouver, rises in the distance between two buildings in the east end neighbourhood of Strathcona. The upcoming VANCOUVER Portrait of a City features 13 scenes, including Burnaby Corridor, that diversely document the city through all seasons, weather, and times of day. Vancouver: more north than Montréal, more overcast than rainy, more psychologically affected by light than by temperature. 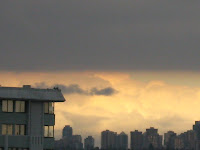 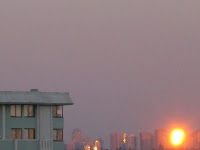 Sky over land never stands still. One must look between the light - quickly and often.

*American born painter Benjamin West spent most of his life in London where he was patronized by George III for 40 years and was a founder of the Royal Academy in 1768. He innovated the representation of modern rather than classical costume in his best-known picture The Death of General Wolfe (c.1771) which is of particular interest to Canadian and British history.
Posted by Christine Hatfull at 17:01