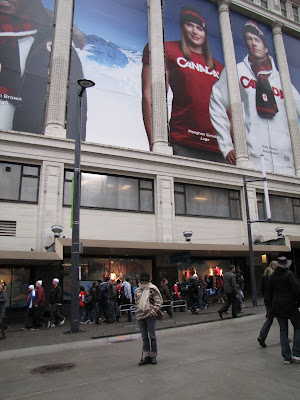 The concept of Fun City is a recurring theme rooted in civic feelings of smallness and dullness.

According to recent, local history this is still a small town though never less than urban even before European settlement. It is a gritty port town with all the crime, corruption, and fluidity of a busy harbour. Together, the uptight entitlement of the English and the hardworking sobriety of the Chinese, forged a vein of morality which developed alongside the one horse, boom or bust, robber baronet tendencies of a frontier wide open to development . Past wrongs are being addressed while many endure but there is now more serious cultural and political significance given aboriginal fine art and social history in British Columbia than could be imagined thirty years ago.* It is this diversified, tentative, self-conscious, multi-cultural process, including immigration from around the world and a slow seeping westward of other Canadians, that writes our civic story. I believe Vancouver has the potential to be a great Pacific/Eur-Asian City.

Meanwhile, due to the provincial code of sobriety, alcohol licensing, off-sales and rules of consumption have been strictly controlled over the years and make it more difficult to obtain liquor here than in a fun province such as Québec. In any case unavailability is a poor deterrent and bar and restaurant owners complain that by-laws and neighbourhood reluctance have made it difficult to create the kinds of fun establishments and entertainment hubs necessary to maintain excitement in the city. Perhaps it is due to years of relative repression that the locals sometimes have difficulty controlling their drunken ardour and exhibit loud, messy, embarrassing behaviour at closing time.

I enjoy being in the city centre to experience the energy and liveliness of so many souls milling about and welcome the suburbanites, who are now here in droves, to get on the Skytrain or Canada Line (what a stupid name by the way - I preferred RAV/Richmond Airport Vancouver and suppose the train naming committee thought people might be confused about where they were and think if its Tuesday this must be Belgium BUT I DIGRESS) and come to town for the fun of it. I suggest trying the cultural activities, eating the delicious food, visiting the parks, walking the beaches, watching the people and saving the drunky drunk for the rec. room on Friday night. Knowing the line between conviviality and obnoxiousness in public is a worthy goal.

When the party is almost over, and the crowds have thinned, let us participate in the Para-Olympics. Especially to those who did not see an event, I recommend taking the opportunity to roar and stomp and cheer with strangers, should it arise. Fun, it feels good, that is all.

* It is worth noting that organizers of this corporate, cultural, sport event are not being charitable when they utilize the images and ceremonial aspects of First Nations artists and traditions. They are fully aware that it is the most iconic and recognizable art of the region and of the most interest to the world and therefore valuable to the enterprise.