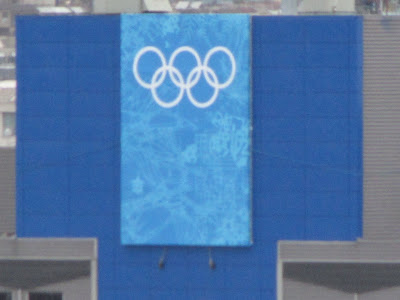 The Aquilini family done good. They own the Canucks and GM Place and, during February 2010, an Olympic venue wherein high end hockey games shall be played out to the golden finish. But when I say good I mean the way they covered the permanent signage with this temporary blue spread. It resembles a kimono. I likes it!

I would cover the Scotia Tower (Georgia and Granville Streets) with an Edwardian styled coverlet in order to conjure the attractiveness of the mature building that once stood on that spot. It was torn down carelessly in 1975 and replaced with a homely, awkward, teen-aged oaf of a tower. One day it too will be torn down because it is ugly and outdated; a mere improvement. Annoyed as I am by its presence I would concede to a good cover job being a more sustainable solution. But I digress.

GM Place is an athletic arena named after a now debt-ridden American corporation which incidentally conspired with our post WWII Vancouver City Hall to rip out the trolley lines from Hastings Street. Can you imagine? We deserve better; time to trade up. What say you Aquilinis?
Posted by Christine Hatfull at 00:35