Get Thee To The Rink Mr. Crosby 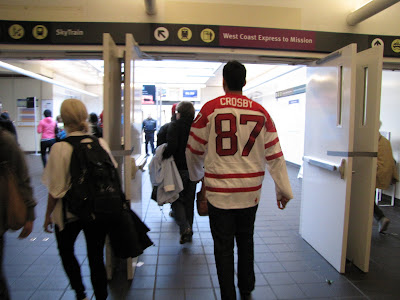 I cannot leave the house without tripping over No.87, Sidney Crosby: sightseeing, rushing for transit, visiting venues and pavilions.

There is a hockey mania on the downtown streets and in the bars and restaurants where the public roams and which will erupt in a mighty roar sometime early on Sunday afternoon. The land is filled with collective pride and bravado, no matter the outcome of the hockey final and some bad press from Britain and Russia. It is ironic that the national media most critical are hosting the IOC in the next four years. Britain is perpetually focused on securing the attention of America and remains uneducated in its imperial history while the Russian media has brought up matters of Arctic sovereignty and military mis-doings, subjects beyond sport that require perspective and scrutiny.

My favourite undertopdogs are the Americans who are never more fetching than when they are humbled. Almost a decade of terrorism and security agendas, protracted corporate war, social change, and a deflated economy has altered the American psyche introspectively.

Tomorrow could be a rare international exposition of the Canadian psyche: a brief, attractive, red and white twizzle. Then, it is back to school on Monday, budget on Thursday. 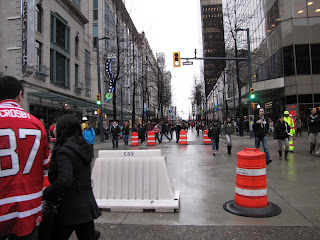 **Update: 28 Feb 2010, eight minutes into the overtime period, Sidney Crosby scores the tie-breaking goal against the USA thus winning the tournament and Canada's 14th gold medal of the 2010 Games.
Posted by Christine Hatfull at 08:33