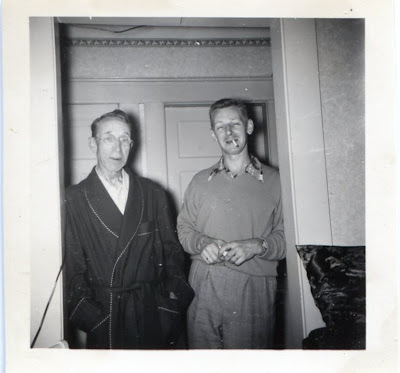 Ed Hatfull is my father's cousin. He was born in Oceanside, Long Island in 1910 and resided there until he retired in 1979. I know this because I sought him out when I moved to New York in the autumn of that year and was informed he had just left for Florida. I finally met him, ten years ago, when the 90 year old widow came alone to Vancouver to embark on an Alaskan cruise.

His father Edgar, who emigrated from England in the early 20th century, was a jeweller at Tiffany's in Manhattan. Edgar's older brother Charles Sidney, known as Sid, was my grandfather and is the man on the left in the photo above. When Sid left England in 1910 his first stop-over was in New York where he stayed with Edgar and and his family including baby Edgar. The other man in the photo, my father Douglas, was born seven years later back in England during the First World War but before that bit of fate Sid moved on to Vancouver where he settled. He then sent for the trunk of carpentry tools he left behind in Oceanside and the top and front were partially re-painted by Ed Senior who added the new forwarding and return addresses.

This trunk is my most beloved artifact. It provides tangible connection to my father's people and I can know my great uncle by his hand printing. Incidentally, I also inherited a small ruby ring Uncle Edgar made for his niece Winnie before he left England. 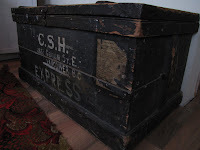 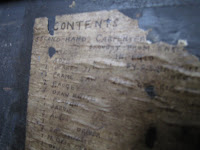 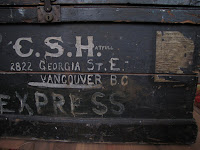 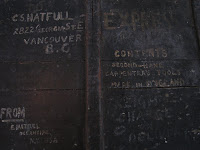 If I had the opportunity I would fly to St. Petersburg to visit my father's oldest living relative whose secret to longevity must surely be due in part to his jolly, positive nature. He is from a receding generation and a worthy source of family history and inherited conviviality.
Hurrah Ed and congratulations as you enter your 101st year. Your card is in the mail and this post is for you!
Posted by Christine Hatfull at 13:33