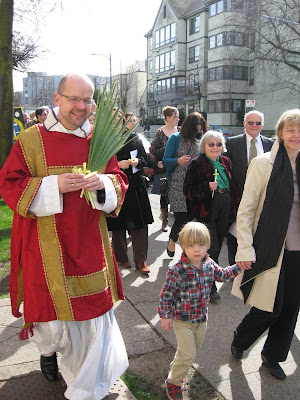 And so Holy Week begins on Sunday, March 28, 2010 with a parade around the block on East Cordova Street. It is an ecumenical event which includes Roman and Anglo Catholics at its start. Accompanied by the Carnival Band, the participants sing and wave palm fronds, drawing attention to a special moment in the church year. After dropping the romans off at St. Paul's, the anglos continue on to St. James where they reenter the church along with the band and their cacophonous outdoor sounds. Quietly at first but steadily and louder comes the rolling thunder of the mighty Casavant pipe organ, filling the edifice and everyone in it with its sonic vibrations and bringing everything to attention as the service commences seamlessly.

Come for the music and meet the community.
Posted by Christine Hatfull at 22:11