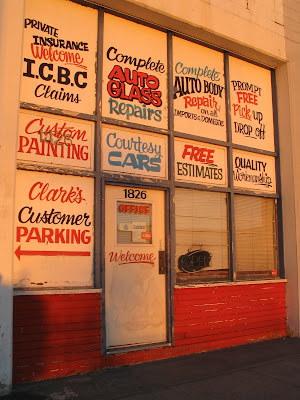 Here is a venerable storefront on Clark Drive which was just so for decades: cheerful and tacky and firmly rooted in a 1950's sensibility. Then, a couple of years ago, the inevitable happened - neutralization. The insidious practice of painting older, less attractive buildings in shades of black and grey has become commonplace as an alternative to renovation. It is an inexpensive method but with a dark side. Closeup these buildings appear modernized and the dark colours cover a myriad of flaws but from only a short distance they also give the appearance of black holes on the streetscape as if they were disappeared.

This building is now painted in a muddy taupe, with streamlined signage for an upgraded car repair business; it is offensively dull. The excitement of orange and typeface has made way for the artificial sophistication that appeals to today's upmarket car owners (TAUPE). A more expensive and deliberate version of this type would be the new convention centre on the harbour. The darkish grey gives it a dour and overcast expression that sucks the energy out of the landscape. It was made, not for beauty but, for power.

In a northern city with many natural grey tones and low lights such a practice needs to be identified and curtailed before all of the low rise buildings of a certain age disappear visually down to their inability to reflect light. Although they may not be beautiful by design they are physical components of a unified and occupied street life and, by extension, city life. If progress goes unappreciated it is because it sometimes lacks common sense; encouraging colour and light in this city is an exciting solution to dullness. No better example can be found in the architectural lighting and colourful bunting installed for the Olympics. The relative affordability of such an approach makes a case for preserving the many fine examples of mid-century modern in all of their colourful finery. At the top of that heritage list is Chinatown. Attempts to improve and strengthen lighting must be encouraged and supported in order to save what is left of this historic neighbourhood. But I digress.
In conclusion and with regards to Clark Drive: better street lighting, more crossing lights, speed reduction, better bus service, trucking redirection and, the planting of trees from north to south would improve its quality of life and visible attractiveness. People live here.
Posted by Christine Hatfull at 23:06