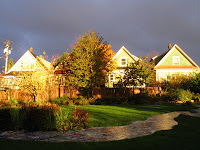 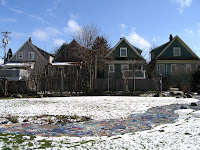 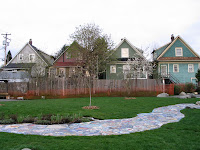 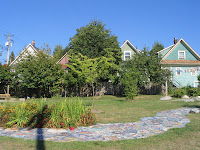 This band of images comes of a plan to photo-document the small architecture of the Grandview-Woodlands neighbourhood which is varied and of interest to me. Of special note are the little groups of sibling houses: twins, triplets, quads, and other family members including this pair of identical twins. Over the decades they have taken on individual characteristics due to the humans who constructed, maintained, and lived in them, leaving behind anthropomorphizing features on their exteriors. They express themselves through an expensive heritage renovation with historical paint and millwork, a poorly executed 1970's renovation or with the original, peeling paint of 90 years ago. My increased interest in these four little wooden kit homes of the 1920's as seen from the bottom of Mosaic Creek Park indicated that a once large project had taken on a more specific focus.

I lived across the street at the time and got into the habit of taking the same picture from the same rock whenever the light beckoned. Not only on my way out would I be drawn to the front door, on a whim, in the hope of a well-lit moment. Starting in the fall of 2005 until the end of 2008, I took pictures with some kind of regularity, documenting the effects of changing light on this neatly framed and homey landscape. I next devised the concept of placing four in juxtaposition and in strict chronological if random order on a bookmark strip as a business card for my East Side Cultural Crawl presence at William Clark Studios. By November I had the first 12 months of my practice represented chronologically, visually, and seasonally with these four photographs and printed them as a usable business card which I launched at my ESCC 2006 WC*.

There is now a group of 18 bookmark slips. Some self-advertise upcoming exhibitions of photographs while others are designed simply to exercise an idea. The latest group feature various Vancouver landscapes and urban concepts with mention of this website on the reverse side. Apparently some people collect them. This is the first and still my favourite.

* My current space at William Clark Studios is a 6x9 (12 foot ceiling with a vent) former washroom that stores what is left of my once expansive studio at the south end of the building where fibre artist Patricia Chauncey now works. I have been known to empty it - excepting sink and toilet - for the Crawl and hang out to the shock or delight of the visiting public. A space is a space after all and by the weekend's end I convince most visitors to entertain the notion of the artful bathroom paradox.
Posted by Christine Hatfull at 11:07