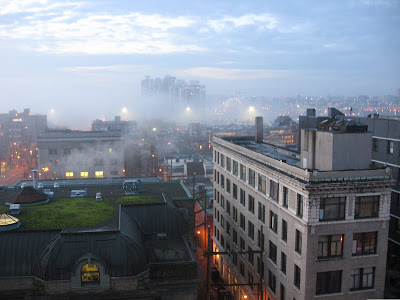 As seen from this point of view, the City of Vancouver is skewed to the west. Egregious planning decisions in the 1950's and 1960's almost levelled the neighbourhood of Strathcona (out of frame, to the left, east of Main Street) and did manage to cut back the human flow from east to west. City planners spent those 20 years trying to expunge what they called urban blight from what is now a jewel in the city's crown. A few housing projects stand alone in contrast and are forlorn reminders of their failed schemes. In the end (1968) the new government of the day withdrew construction monies and instead threw a little "own the podium" gold at neighbourhood renewal and the splendid, 40 year re-gentrification has been well documented.

Unfortunately the African neighbourhood of Hogan's Alley, closer to Main Street, was mostly bulldozed and the Georgia and Dunsmuir Viaducts were erected in 1972. They were designed purely to expedite automobile traffic and boasted narrow, dangerous sidewalks which continue to discourage foot traffic. Such design creates unlivable places. Fortunately, by pulling the funding from the super-highway project, the Government of Canada was also protecting most of this historical, small architectural stock for the City of Vancouver. Strathcona and Main Street give credibility to the False Creek developments up to and beyond 2010; the changing appearance of both low and high rise housing in the area reflects a spirit of preservation and inspiration that is a cultural legacy. 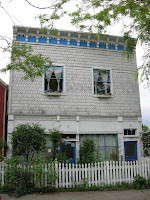 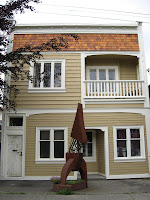 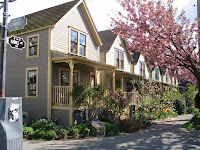 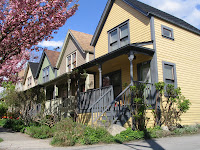 Meanwhile Citygate sits fetchingly on the misty horizon and provides a reason to rethink the viaduct approach to transport. The area now includes the the Olympic Village development, Yaletown and the Pacific Boulevard Sport Palaces. Common sense strongly suggests a foot-path, cycle, trolley, etc. solution to the obstacles separating the neighbourhoods of our great (coulda, shoulda, woulda) city. We the citizens must decide if we are one or merely the parts.
Posted by Christine Hatfull at 06:48