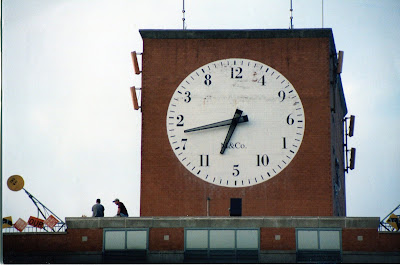 Completed in 1989, this 13-storey, red-brick luxury apartment building marked a shift south and east in New York City real estate interests putting pressure on a community more famous for its ethnic (Jewish and Hispanic) roots and culture and starving artists. When Mr. and Ms. Wall Street started to move into the area, they created a need for hip, available, if not affordable, Manhattan addresses, and re-gentrification began in earnest. The provocative name, liberal additions of public art by downtown artists, and four "Askew" clocks inspired by a watch featured at the MOMA which grace the water tank enclosure were conceived by principal developer, Michael Rosen. Within the next decade, west along East Houston Street, to the Bowery, so many towers were erected in the shadow of 9/11 that the city was pressed to implement contextual zoning for what was left of the Lower East Side.

There was a contemporary debate in Vancouver regarding non-contextual developments in Gastown at the time the eight-storey Van Horne tower, 22 East Cordova, was built in 1996. Critics remarked that it was out of scale with the older and smaller architecture of the previous century in the city's most notable heritage neighbourhood ; such decisions irrevocably change the the expectations and direction of the urban landscape forever. Inevitably, matters of presence, density, and profitability prevail and in the 21st century the Woodwards development is welcomed enthusiastically even though its residential tower, at 43 storeys, is higher and bigger than anything the Van Horne could ever aspire to be.

Twenty years later, Red Square is a familiar fixture on the Lower Manhattan landscape with the East Village on the north and the Lower East Side on the south of the Houston Street artery and, critical opinion has since been transformed into historical perspective.
Posted by Christine Hatfull at 21:13