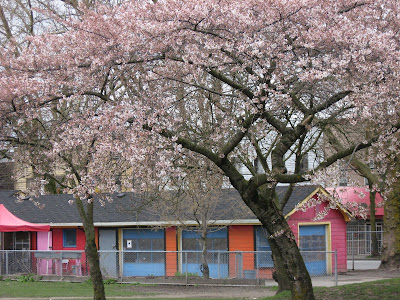 Oppenheimer Park, in the centre of what was once known as "Little Tokyo" in old Japantown, is undergoing alterations. The funny little pink clubhouse and the resplendent trees over it that bordered the north side of the park along Powell Street are now gone to make way for a necessary but inept-appearing upgrade. A few of these memorial trees remain in the east quadrant where a new playground is being constructed alongside a new dark grey activity centre. A replacement row of ornamental cherry trees has been planted along a diagonal pathway that drives into these improvements and past the ballpark which has been unavailable to local residents during construction. Along this northern side of the park there is now nothing in view except the broken-down storefronts across the street. Perhaps the perspective will improve when the money is spent and the transformation is officially complete.
Posted by Christine Hatfull at 22:49